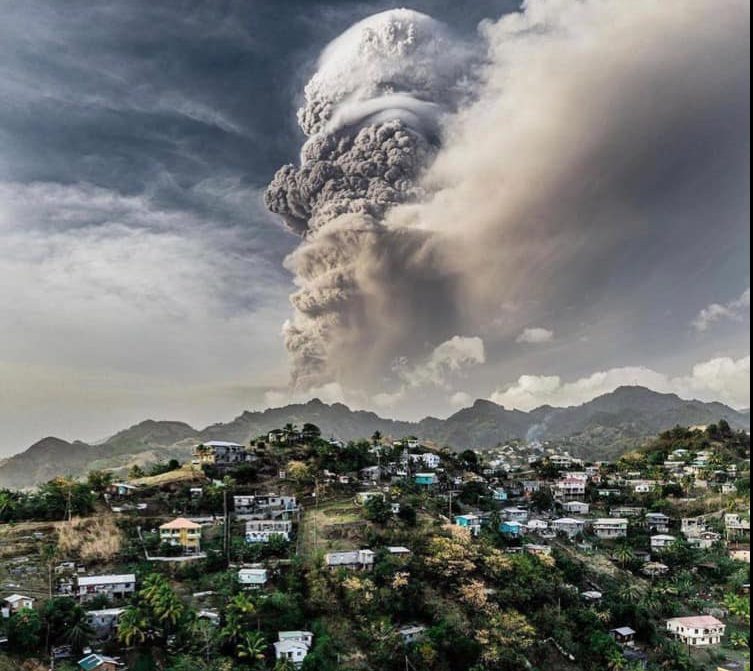 On the 9th of April the Caribbean island of St Vincent experienced its first volcanic eruption since 1979. Over 11 days later, the island continues to experience eruptions from its volcano, La Soufrière.

La Soufrière erupted again on the 18th April at 4:49pm after a period of high-level tremors. The explosion caused a plume that rose 8km in the air and drifted towards the south and southwest of the island.

Prime Minister issued a red alert on the 8th April, and an evacuation order after monitoring of the volcano showed an imminent eruption.
It is estimated that around 20,000 citizens have been evacuated with almost 1,450 families being displaced. The island has been severely affected by ash fall which has disrupted travel, farming and devastated homes and the environment.

NEMO SVG stated in a Facebook post that the volcano continues to erupt. Its pattern of seismic activity over the last few days is typical of the growth and destruction of lava domes. Explosions with accompanying ash fall, of similar or larger magnitude, can occur with little or no warning.
Didier Trebucq, United Nations Resident Coordinator for Barbados and Eastern Caribbean Countries and territories tweeted images of the devastation in red zone areas on the island.

The United Nations will be launching a funding appeal in an effort to help St Vincent and neighbouring islands with a framework for strategic, coordinated and inclusive response for recovery/reconstruction.

20 Apr 2021, 9.30 am AST: #UN will launch a Global Funding Appeal for #LaSoufrière Volcano Response in #SVG and affected countries. US$29.2M appeal will provide a framework for strategic, coordinated and inclusive response for recovery/reconstruction.
Live:https://t.co/4b8j7hHC77 pic.twitter.com/MzLiJNo70U

Along with this Minister of Agriculture, Forestry and Fisheries, Saboto Caesar has stated that livestock farmers will be assisted with feed support. $250,000 has been put aside to help those with livestock in need.
It is a worrying time for those living in St Vincent, if you are living in the Diaspora and would like to help relatives/others back in St Vincent, check out the government official bulletin containing information of ways to help.
To keep up to date with whats happening in St Vincent follow NEMO SVG on Twitter. Us here at Pie Radio send our thoughts and love to those in St Vincent during this difficult time.