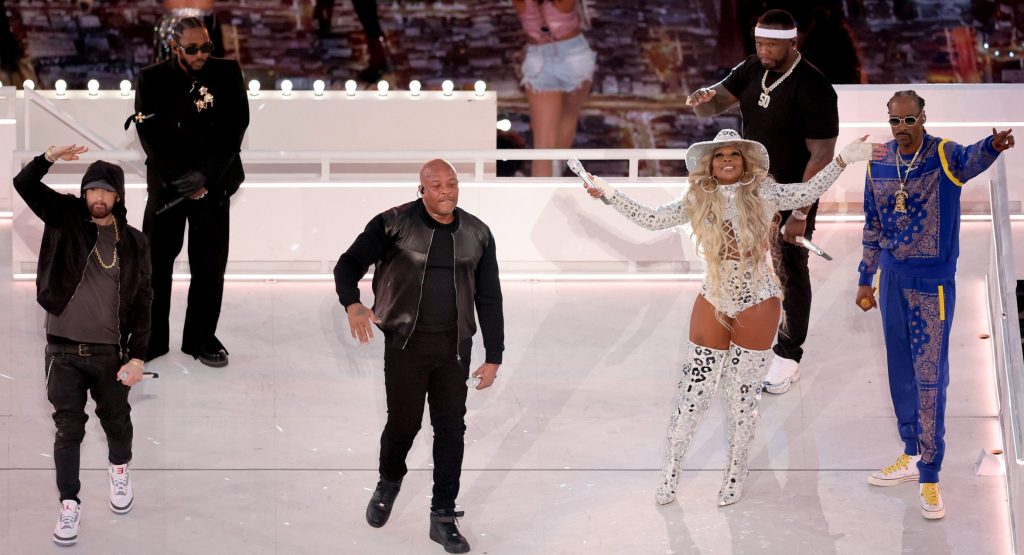 Five legendary rap and hip hop artists played this year’s Super Bowl LVI halftime show on 13 February at SoFi Stadium in Los Angeles, California. Millions of people tuned in to watch the Los Angeles Rams vs the Cincinnati Bengals game, as well as performances from Dr. Dre, Snoop Dogg, Eminem, Mary J. Blige and Kendrick Lamar. The show also featured a cameo from Anderson .Paak and an unannounced appearance from 50 Cent. The Super Bowl pre-game show featured a performance of ‘America the Beautiful’ from Jhené Aiko, who sang while joined by harpist Gracie Sprout. Mary Mary did her own version of ‘Lift Every Voice and Sing’ and Zedd, electronic music DJ, kicked off the game.

It was noted that the main artists this year were all experienced performers with long careers behind them. Dr. Dre was the oldest performer at 56, Mary J. Blige is 51, Snoop Dogg is 50 and Eminem is 49, with Kendrick Lamar as the youngest performer at 34. The reaction from some to the halftime show was that it should have included younger artists that reflect America’s up and coming talent. However, the halftime show proved to be a success as many people enjoyed the nostalgic atmosphere. The iconic status of the five musicians is evident as together they have a combined 44 Grammy Awards, while Eminem leads with 15 trophies.

The set was comprised of white houses and shops to portray Los Angeles buildings, while a live band and dancers supported the performances of the five artists. Dr. Dre and Snoop Dogg began with ‘The Next Episode’ and followed it with 2Pac’s ‘California Love.’ 50 Cent revealed himself to the audience while hanging upside down and dropped to the stage to give a performance of ‘In da Club’. Mary J. Blige performed next singing ‘Family Affair’ and ‘No More Drama’. Blige wore an eye-catching custom outfit courtesy of Peter Dundas, appearing in a white and silver sequined set made up of a snow leopard print top with matching shorts and boots.

Next up was Kendrick Lamar who appeared surrounded by blond back up dancers who jumped out of boxes wearing ‘Dre Day’ sashes. Lamar, born in Compton, performed ‘Alright’, after an intro to ‘M.A.A.D City.’ Lamar also paid respect to his friend Virgil Abloh, the artistic director of Louis Vuitton’s menswear collection who passed away two months ago, by wearing a suit Abloh designed. Abloh’s creative vision was influenced by street style and hip hop and he made history as the first African American designer at the head of a major French luxury brand.

Eminem then appeared on top of one of the white set structures with Dr. Dre, opening with ‘Forgot About Dre’. Anderson .Paak joined on drums and Eminem closed his set with a performance of ‘Lose Yourself’ which featured on the soundtrack to the 2002 film 8 Mile. As the song ended Eminem took a knee while holding his head which seemed to be in tribute to Colin Kaepernick, the former quarterback who in 2016 knelt during the national anthem as an act of protest against police brutality and injustice. Some people have theorised that Eminem was told by the league not to do so but decided to anyway. The show closed with Snoop Dog and Dr. Dre reappearing together for ‘Still D.R.E.’

Kanye West attended the show in his signature look of all black and also wore a black mask which totally covered his face, an accessory which is part of his new look for his ‘Donda’ era. Jay-Z also attended with Beyoncé and their daughter Blue Ivy, wearing a casual, plain outfit with a Los Angeles baseball hat and sunglasses to keep low-key and avoid recognition. Jay-Z’s entertainment and sports company, Roc Nation, co-produced the halftime show for the third year straight. Roc Nation partnered with the N.F.L in 2019 following a loss of artists who avoided the halftime show to support Kaepernick.

According to Samba TV, 29 million U.S. households watched the halftime show. This is an increase of 19% from last year with the Weeknd as headliner at Raymond James Stadium in Tampa, Florida. Previous headliners for the Super Bowl halftime show include Beyoncé, Madonna, Coldplay, Katy Perry, U2, Lady Gaga, Michael Jackson, Jennifer Lopez and Shakira. This year’s halftime show is also extremely popular online; the nearly 15 minute video of the event had been viewed more than 35 million times on YouTube only a day after being uploaded. The increase in audience numbers is thought to be because this year’s performers had a wider appeal as the artists featured were popular in the ’80s, ’90s and early to late 2000’s, generating a sense of feel good nostalgia.

Snoop Dogg responded on Twitter to the halftime show by thanking the audience.