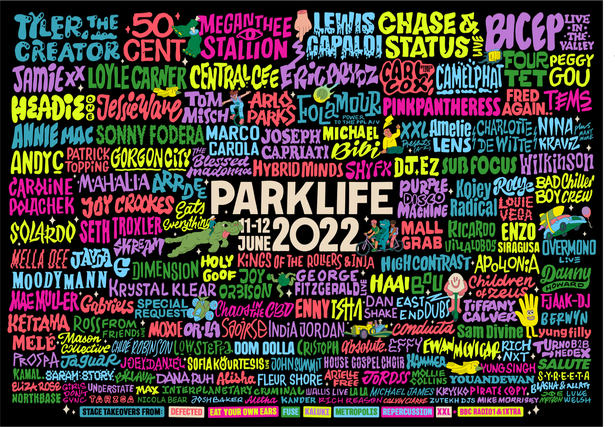 Parklife announced the official line-up for June 2022 last month, with Saturday and Weekend tickets selling out in twenty-four hours, but a small number of Sunday tickets remain.

Heaton Park will host many global stars on June 11th and 12th, featuring exciting exclusives including Tyler, The Creator making his UK headline debut. The Los Angeles native is considered by many to be one of the most innovative rappers of his generation, winning the Grammy for Best Rap Album in 2020 for his fifth album ‘IGOR’.

Check out the music video for the highest charting single of his career so far ‘EARFQUAKE’ off ‘IGOR’, which reached number thirteen on the Billboard Hot 100.

Parklife also managed to secure a UK festival exclusive of one of the biggest names in hip-hop, 50 Cent. Gaining his first U.S number one single with ‘In Da Club’ in 2003, the track remains popular to this day, proven by the official music video hitting an impressive one billion views. 50 Cent performed the hit single in an unannounced appearance at the Super Bowl halftime show earlier this month.

Megan Thee Stallion is set to return to the festival for a second time, following her performance last year. The Houston rapper has quickly risen from success to success in recent years, her debut studio album ‘Good News’ (2020) features major artists including DaBaby, City Girls, SZA and Beyoncé. Megan has built a reputation for herself as a lyricist and performer with a confident sex positive attitude which was earnt her the appreciation of a global fan base.

Get a taste of Megan’s energetic visuals and entertaining lyrics from this video of her live at the Grammys last year, performing ‘Body’ and remix of ‘Savage’ featuring Beyoncé.

Get remaining Sunday tickets at www.parklife.uk.com/tickets/.